Glimpses of Skiff: Living in a Teenage Wasteland

Glimpses of Skiff: Living in a Teenage Wasteland: It's noon; the time is upon me. Any minute now, they will awake from their hibernation, pasty skinned and bleary eyed.  I look for a ...
Posted by Kristine Meier-Skiff at 1:17 PM 0 comments

Living in a Teenage Wasteland 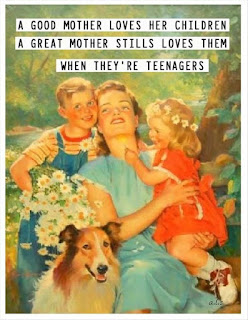 It's noon; the time is upon me. Any minute now, they will awake from their hibernation, pasty skinned and bleary eyed.  I look for a place to hide, if I'm very still, if I'm quiet maybe they won't find me.  I stand perfectly still in the bright sunshine pouring in from the kitchen sliding glass doors; it has been said the light burns their eyes and pale, pale pasty skin.  Thus I stand, quiet, barely breathing, willing the sweat on my brow to redirect it's trajectory away from my eyes.

I hear them before I see them; indecipherable grunts and moans, the occasional crash as they stumble over the debris left from the midnight feeding frenzy.  They round the corner, shielding their eyes from the bright sunshine.  I hold my breath waiting for them to pass.   All my hiding is for naught, my silhouette has been noticed.
"ugh augh ooogh."  Why I pause to translate the grunts to English I'll never know.  It's always the same thing.
"Mom, food.....eat?"'
"It's noon.  Make yourself a sandwich."

"I haven't eaten breakfast!"
"It's noon, it's lunch time.  If you want breakfast for lunch grab some cereal"
A gallon of milk and a box and a half of cereal later, the war begins; gunfire, aliens invading, robot's exploding, a menagerie of dystopian worlds clashing in chaos. 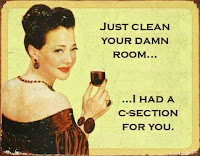 A  smog settles over the living room.  The smell can only be described as primitive; a noxious mixture of adrenaline, testosterone, grease and sweat.  I cover my nose and make my way through the bodies that litter the floor, eyes glued to their respective screens.  A trail of Lysol and Febreeze follows in my wake.
"Pick up the dishes and run the dishwasher." I say to the zombie closest to me.
"I did it last time"
"I don't care. Y'all are not going to sit here all day and rot.  Get up and do something productive."
"I have to no problem getting up." cracks the wise-ass zombie
"Yeah we all know how well you get up.  We hear you getting up four times a day" replies the mind in the gutter zombie.
I remember how quickly my cold cream is disappearing and I have a  horrific thought.
"Which one of you is using my face cream?"
The silence is deafening.
"Do NOT use my face cream to masturbate!!!  I will buy you your own lotion for that!"  Disgust overwhelms me as I rush to the bathroom to scrub and disinfect my face.
After thoroughly scrubbing my face and throwing away my mostly empty jar of cold cream, I return to a sink still full of dishes.
"That's it!! Devices off!! There will not be another gunshot, zombie apocalypse or robot dance until this house is clean! You weren't raised in a barn, don't act like you were."  nice mama, rational mama has been replaced with crazy, I just scrubbed my face raw, mama.
"The dishwasher isn't working!"
"I blew up the vacuum cleaner by accident!"
"Why should we mow the grass anyway? It's just going to grow again! It's a waste of my time!"
(because laying around and playing video games whilst your filth accumulates around you is such a GREAT use of your valuable time!)
"I'm hungry!!!"
"I'm thirsty!!"
"I have a headache!"
"He won't stop humming!"
"He won't stop telling me what to do!"
One load of dishes done and the living room "picked" up.  I call it a win and start counting down to bedtime....my bedtime.

Finally night falls.  I escape to my bedroom before the zombie's truly awake. Night time is when they feed.  The night is filled with juvenile double entendres, fart jokes, animee and technical jargon. Night is when more of their kind come out to play.....night is when the teenagers reign supreme. 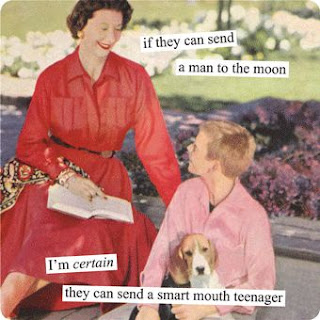 The scream bubbled up from deep down in her soul, forced it's way past her throat and finally through her lips.  The sound reverberated through the interior of the truck bouncing from the windshield to the windows and back again.  Still the screams kept forcing themselves out of the depths of her soul.  Onward she drove, eyes dry, screams being torn from the very center of her being.  She drove without purpose or destination. She would drive until the need to runaway, the need to escape the chaos and pain subsided; until the screams could be pushed back down and the pain was buried beneath the sense of purpose that drove her.   She knew she could not truly escape, nor did she really even want to.  There were too many who depended on her, too many whom she loved; it wasn't in her to abandon them.  So she drove on, waiting for the panic to die down, for the feelings of failure to slowly ebb away and finally for the screams to replaced with healing tears.

She came to a rundown town on the lake called Runaway Bay.  The name called to her, the dilapidated buildings resonated with her emotions.  She pulled the truck into the parking lot of an old, abandoned restaurant with an ancient For Sale sign dangling crookedly on one hook.  The restaurant had a small dock in the back.  There she sat in the cold rain and finally the tears came.   She cried out all the pain, terror and anger she had been swallowing for the past week.   She thought back on the events that had led her here, sitting on an abandoned dock the day after her 40th birthday; a birthday that had been lost in the craziness of what had happened in the last week: one kid hospitalized for self harming, one who had physically attacked her after missing his medication and another who was on the verge of hospitalization because of his extreme emotional liability (on the verge as in the doctor started filling out the forms to commit him).  One week and her entire world had been shattered.  The one thing she had taken for granted, the fact she was a decent mother, now lay shattered at her feet like the shards of a broken mirror.  So she sat, she cried and she willed herself to pull her shredded insides back together for the sake of those she loved.  She would face these challenges, she would make changes and her family would not only survive, they would thrive. This is the vow she made sitting on a rotting dock in a town called Runaway Bay. 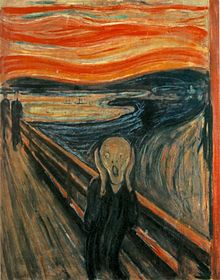 We have made other changes in how we deal with things in our home as well.  But the largest changes were made in the treatments our boys receive.  The past month has been busy but it has also been much more peaceful.  Change is hard but it is well worth it.
One last thing, though admitting our son to the behavioral unit at the hospital for in patient treatment was terrifying and absolutely the hardest thing I have ever had to do as a parent, it made a huge difference for him. If you have a loved one who is self harming or threatening suicide, please seek treatment for them.  It can literally mean the difference between life and death.

I'm sorry that my last few blogs have been heavy.  I do prefer to write light and funny things but light and funny isn't the season of life we have been in.  I try at all times to be as open and honest as I can in a public forum.  To pretend to be in a place we are not does a disservice to you, my friends and readers.  Thank you for sticking with me even though the blogs have been sporadic at best.  I'm hoping that as our family life continues to stabilize I will be able to devote more time and energy to writing again.  Honestly, I miss it and I miss you all.  As always I send you my love, Kristine