So I married an Aspie

I have given glimpses into many areas of my life here in the kingdom of Skiff.   I have specifically focused on the effects of autism in our lives but I have stayed away from one of the most personal ways autism has affected me, my marriage.  I have alluded to it in my first blog posting but since then I have steered clear of this delicate topic.   I have many times come close to addressing it but I wanted to have the right words to convey my thoughts and the lessons I have learned.  Also, much of this is old news for us.   On a daily basis our challenges now revolve more around the boys.  But this is a very important issue, one that affects many marriages and relationships.  To get to where we are now I have to start at the beginning.  So grab a glass of wine or whatever your preferred beverage and settle back as I steer this blog back in time 14 years.
It was August of 1997.  I left home and moved 500 miles to upstate NY to attend Bible school.  It was a small college located in a smaller town about 20 miles from Rochester. This was a strange new land where people did not smile as they passed by you in the tiny super market and they certainly did not strike up a conversation with you as you checked out at the register.   The temperature was cool enough to require heavy sweaters….seriously heavy sweaters in August!!!!  I might as well have been dropped on Mars.  This was an exciting adventure and I loved every minute of it.  On the first day of orientation, I saw him, the tall guy, with black hair, incredible blue eyes and a sexy jaw line.  Just my type ;)    I was smitten as I looked at him standing above me on the hill.  WOW!!  That incredible guy then started walking toward me.  There must be some mistake; he can’t be walking over to me, I nervously thought as looked around me.   Suddenly there was a tap on my shoulder “Hi my name is ------.  So where are you from?”   I don’t usually have trouble finding words but it took me a little bit of hemming and hawing to get my thoughts together.  We chatted for a few minutes; what we talked about I couldn’t say.  I drifted back to my dorm room and told my roommate all about the good-looking guy I had chatted with. 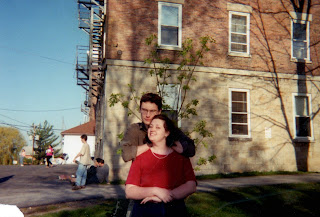 The Bible school we attended is a very intensive place both spiritually and academically.  I was also working in the cafeteria to help pay my way, the leader of several student groups, and participated in other extracurricular activities.  To say I was busy would be an understatement.  I would notice Clark Kent (the nick name I assigned him because he looked so much like Superman’s alter ego….right down to the superman curl) as we passed by one another  but he never talked to me.  In fact he was kind of rude.  Oh well, rude people can be cute too, I thought.   A couple of weeks went by before we spoke again.  I was sitting at a table in the cafeteria when Clark Kent ran up to my table (literally ran….he was always running everywhere back then.  It was like God had taken the energy of three people and stuffed it into his body) “Hey I heard you have a car.”  He says to me.  No preamble, no “Hi” just straight to the point.  “We are having a birthday/ going away party for my friend R.  You are invited.” “Thanks. I guess I could come” Clark then stood on a chair and announced to the whole cafeteria “Hey she’s driving to the party.  You can all catch a ride with her.”  “I don’t even know where I’m going”  “Oh yeah.  My friend K will ride ride with you and tell you how to get there” Then he was gone, off running again.  When I got to my car 20 people were waiting for a ride.  Did I mention I drove a 2 door Toyota Tercel.  I think we crammed about 7 or 8 people into it.  We got lost in the middle of nowhere on the way (this is before the days of GPS). The person who had been assigned as my navigator had only been to the house in question once, in the dark.  By the time we arrived at the party I was pretty ticked with Clark Kent.  I could not believe that Superman would ever put anyone in the predicament that I had found myself in. To top it all off, he then proceeded to completely ignore me for the first half of the party.  The second half of the party he flirted outrageously with me.  I was completely baffled by the time I left.   I told my roommate the incredibly frustrating evening I had.  She then changed his nickname from Clark Kent to Ice-Man.
Ice-Man and I had many similar meetings.  I never knew what to expect from him.  Sometimes we would have these intense deep discussions about everything from God to starting businesses.    Other times he was flirtatious and others he completely ignored me.  I was so busy I really did not have time to think on it too much in the beginning but by Christmas break I had sworn him off.  Anyone that was so fractured was not for me!!  I enjoyed a wonderful break.  I signed my car over to my sister because I was a poor college student and could not afford the payments anymore.  That left me to take the bus back to college (500 miles in a bus alone as a young, single woman is not an experience I would recommend to anyone….just saying).  When I stepped off the bus, completely exhausted and frazzled I was suddenly swept into a bear hug.  Before I could get a good look at who had me, I was swept off my feet and swung in a circle.  I looked up and saw Ice-man had me.   According to eye witness reports the whole bus scene was incredibly romantic.  I was in such complete and utter shock I didn’t notice.  I mumbled something about “good to see you too”, got into my friends car, and sat with a shell shocked expression on my face for 30 minute drive back to campus.  I could not reconcile the man who had just swept me off my feet (literally) with the man I had left a few weeks before. The same one who would not even look in my general direction, much less hug me. Over the next few weeks Ice-man completely disappeared to be replaced by someone entirely different.  Everywhere I turned, there he was.  I could not get away from him.
One day during this time I was walking on campus and literally everyone I passed hugged me.  Don’t get me wrong, I’m a social kind of girl but for every, single person to show me this much attention was unusual even for me.   I was simply too busy to pay any real attention to it.  I continued my day and ended up at work.   As I was standing in the window of the cafeteria, washing dishes, I noticed everyone pointing above me and laughing, many came around and hugged me.  Now I’m not the brightest bulb in the pack but even I knew something was up.  I walked around to the front of the window and saw this flyer posted above my head. 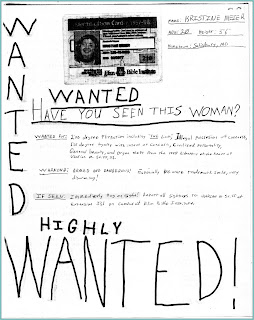 These were posted all over the campus!!!  EVERYWHERE!!!  I was so busy that I never noticed them.  Never accuse Mr. Right of half measures ;-)
So this is the beginning of our story.  Next post I will explore our dating and engagement year.  Thanks for reading.  Don’t forget to leave your comments on this blog to be entered into my 6 month blog birthday giveaway.
Posted by Kristine Meier-Skiff at 1:51 PM
Labels: Autism/ Aspergers, So I Married an Aspie Saga

OH my goodness, that wanted poster might be the cutest thing I've ever seen! :) Love it!!!

For those of you asking for what the wanted poster said here you go.
Wanted
Have you Seen this woman
Wanted for: 2nd degree flirtation including "The Look", Illegal possesion of cuteness, 1st degree loyalty w/ intent of concern, civilized personality, General beauty, and organ theft for the 1998 kidnapping of the heart of Usarian M Skiff, 23
Warning: ARMED AND DANGEROUS! Especially beware of trademark smile, very disarming
IF SEEN: Immediatley Hug on sight! Report all sightings to Usarian M Skiff ext. 331 on the campus at EBI

How adorable! It's nice to go back in time for a little while. Keep 'em comin!

The first time we knew that there was a Kristine was at the bus station. Usarian & Dad had gone to pick up our granddaughter. When they came home Dad said to me ,"I think I just met the girl that Usarian is going to marry."

That's right. I had forgotten about that. Dad told me that story around the time we got married:-)

His handwriting is atrocious. Had he never heard of a word processing documents?

Oh wow- I adore a good love story! This is good stuff! Can't wait for part 2!

Oh I just loved reading that and can't wait for more :) I'm so happy to have met you the other night at IHOP and I look forward to getting to know you more. Thank for sharing!

A wanted poster. LOVE it.

Stephanie-Thanks so much for reading. I really did enjoy our time at IHOP the other night. We must do a repeat;)

Stimey- Hi! I loved reading your blog. I can so----o relate. Thanks so much for reading