April wears many hats.  It starts off wearing that of a jester (I mean who doesn’t love a month that starts off with humor).  Quickly it puts on its gardening hat, trees budding and flowers blooming, the look and smell of spring everywhere.  Then quick as a flash it’s parading around in its Easter bonnet, displaying all its festive finest in celebration of the resurrection of our King-truly the most meaningful of all the roles that April plays.  But there is another, lesser known hat that April dons.  It is blue but it is confusing at times to behold.  When you look at it from one angle it looks to definitely be a derby hat and yet when you gaze again from a different angle it appears to be a top hat and when you look yet again you know for sure it is a cowboy hat.  And then you are confused.  Besides, who wears blue in April anyway? April is a festive month, full of laughter and life.   You decide to stick it in the back of the closet, such a confusing, out of place hat.  It’s better just not to think about it.  This is the hat of Autism Awareness Month.
I have to admit for years I too did not think much of it.  The organizations that pushed so hard were ones that I have deep philosophical differences with.  So I chose to just push it to the back of our closets and forgot about it.  Until this year.  This year I have decided to show just how beautiful that blue, confusing hat actually is.  April is the PERFECT month for Autism Awareness because the spectrum is as diverse, beautiful, and full of laughter and life as the month itself.  For too many years those of us who feel so passionately about neurodiversity have just sat back and allowed others with different opinions to speak for us.  I think it is time that we stand up and be counted among the beautiful angles of this complex hat.
Autism is not a one size fits all kind of thing.  There are many who believe just as passionately about finding a cure as I do about neurodiversity.  But one thing we can all agree about is the need to educate and celebrate Autism with the rest of the world.  I had a perfect example of why on the first of the month.  As I said I chose to celebrate big this year, the boys made their own autism awareness T-shirts.  They are fabulous as you can see from the pictures and I lit our house blue.  The boys were excited to wear their t-shirts to school.  Sam, my son not on the spectrum added a picture of two boys and the slogan “Autism is not bad” to his neurodiversity rocks shirt.  His compassion and understanding of his brothers brought tears to my eyes.  It was a beautiful day so after school we went to the park still wearing the Autism Awareness Month shirts.  We were the only ones there and my boys were thrilled to play in the sand in the warm TX sunshine.  It didn’t take long before other families started to arrive.  The more people to arrive the more my boys started to stim.    I started getting the look….the “why doesn’t she just beat their butts” look.  Honestly I have gotten used to those over the years and don’t let them affect me too much anymore.    But then one lady looked over and pointed at the t-shirt Jamie was wearing.  It said “Autism looks like me” suddenly her attitude and that of her companion changed.  This is what education does.  If we change just one person’s mind about their preconceived notions they will in turn share their new knowledge.  Suddenly it all starts to make sense and our children get to experience life in a more educated culture.  It is my hope to begin a cultural revolution.  A revolution that celebrates the neurological differences that God has created the same way we celebrate the color differences or cultural differences.   So this year join me in donning your own crazy blue hat.  I swear it will be so in vogue. 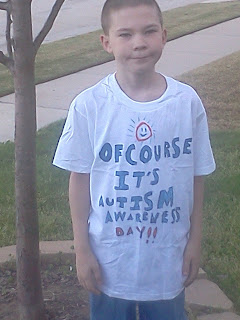 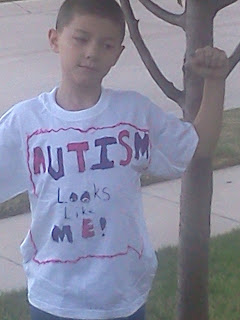 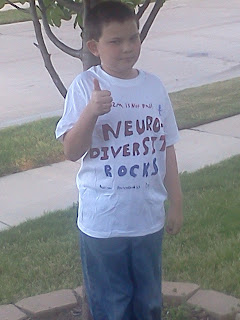 Posted by Kristine Meier-Skiff at 9:23 AM
Labels: Autism/ Aspergers